Published by Shashikant Jagtap on April 28, 2019 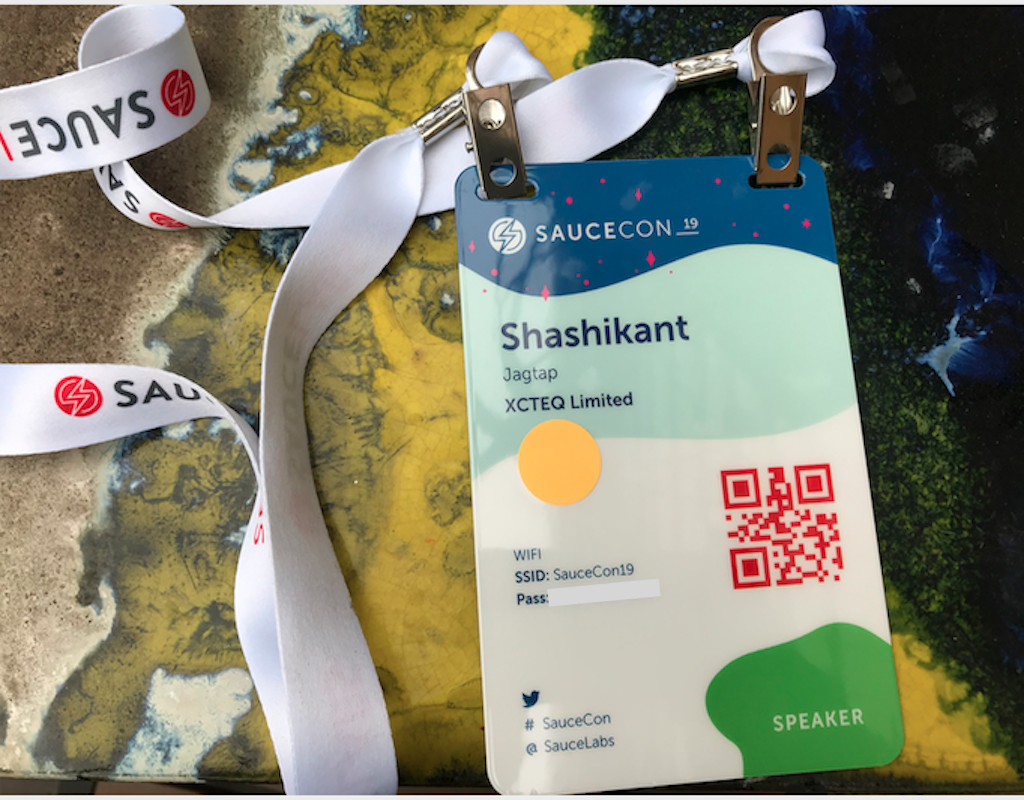 SauceCon 2019 has been an awesome event. I was lucky to be invited as a speaker for the conference and representing my own company XCTEQ Limited. The whole conference was organised beautifully and the speakers selected was great. The most importantly the Conference venue was amazing, all inside the Hyatt Regency, hotel.  The three-day conference with one-day workshops and two days of presentations.

Details of my Talk on XCUITest

Some people provided good feedback on the talk and get connected with awesome people after my talk.

The slides of the talk have been published on the SlideShare as well.

Hope, you will like the talk and if any feedback, feel free to reach out to me.

SauceCon have great people both attendees, speakers and lovely organisers from Sauce Labs.  I enjoyed talking to most of the people during the conference, however, few people blew my mind. I couldn’t resist mentioning their names here.

Jae is the founder of apptest.ai and his research on how AI can be used to test mobile apps was truly amazing and inspiring. I really enjoyed having a chat with him many times during the conference. He is such a friendly and knowledgable person. His talk on how “AI Sauce Bots” with the live demo was awesome. We have awesome and fruitful discussions over the speaker’s dinner and during the whole conference. Wishing him all the success in future.

Charles is a CEO of the Sauce Labs, the company who organised the SauceCon. Being a CEO of million/billion dollar company, he is so friendly and interacted with conference attendee in a friendly manner. I got the chance to meet Charles at the Speakers Dinner in the boat and multiple times during the conference. We shared some great idea on performance testing and AI/ML.

Igor is engineering manager at Tinder. He shared the best ever ideas with me on XCUITest and other mobile continuous delivery. I found his knowledge in this area is incredible. Igor will be the best person to connect to for my future adventures. Special thanks to SauceCon for getting us connected.

Claude gave an awesome presentation on the journey of transformation to automation at Walmart. After his talk, we met personally and talked about some great ideas on mobile test automation.

Mario is a Mobile Architect at ABN AMRO Bank, his talk on how ABN AMRO adopted XCUITest and Expresso framework. We had a great discussion on how native developer can be embedded in the mobile app development.

Kwo is a mobile test consultant at DingIT, We spoke multiple time during the conference and shared lots of ideas.

Rutger leads the workshop on Expresso, I couldn’t attend the session but we had a great conversation on Expresso and native tools for automation. It was great to share some pints and food on the boat at the Speaker’s dinner party.

Joe is the founder of the “TestTalks” podcast and runs the online conferences like Automation Guild. We met before online as I was one of the speakers but It was great to see him in person too.

During the entire conference, I got a chance to interact with many people from Sauce Labs. I had a nice technical conversation with Marcus Merrell, Asaf Saar, Amir Rozenberg, Brad Adelburg, Wim Selles. I also met with friendly Bill McGee, Cat Stevans, Samantha Garder and many more.

We know each other but it’s always a pleasure to meet Angie and Richard in person.

There are various things, I learned from SauceCon but key learning include

SauceCon was a great experience for me and XCTEQ Limited, it’s a pleasure to meet great people. Looking forward to the next year. Meanwhile, have a great year ahead.